Yesterday after a less than happy OB check up (still nothing) I spent some time on the web to distract myself from the fact that I am going to be pregnant forever. I came across this performance by Mandy Patinkin.

I LOVE listening to this guy sing. Honestly I could sit and listen to him sing all day. If you don't know who Mandy Patinkin is, here is a clue: "Hello. My name is Inigo Montoya. You killed my father. Prepare to die." That's right, this man with the gorgeous tenor voice is our favorite spaniard from THE PRINCESS BRIDE.

And just for laughs, watch Mandy pull a joke on David Letterman.

Brother Can you Spare a Dime
Posted by yamsey at 12:25 PM 1 comment:

Harry Potter and the Half Blood Prince (spoilers included)

I know, I know, most of you are just waiting to hear when the baby comes (trust me, I am too) but since he seems to be taking his own sweet time about the whole thing I figured I would get a few things off my mind while I have the time.

John and I went to see the new Harry Potter movie on opening weekend. In preparation we both reread book 6 (and book 7 because really, how do you stop after book 6?) to get ourselves all psyched up. I actually wish I hadn't read the book. Despite my serious case of placenta brain, I was still able to remember all of the details from the book while I was watching the movie which was really distracting. After the flick when I was able to step back and look objectively at the movie, I really loved it. I thought it carried on with the spirit of the book quite well (although I could have done with less of the love story and more of the horcruxes thank you very much) and had some very charming scenes. I think one of my favorite scenes was the one between Harry and Hermione after Ron kissed Lavendar for the first time. It was not exactly how it went in the book, but it was so good I didn't care! Quidditch was also totally awesome. I am so glad we got to see some this movie.

A couple of disappointments: the Ginny/Harry kiss

(come ON! They could have made it so much better!), the added scene when the Burrow went up in flames (Where exactly are they planning on having the wedding in the next movie?), and the lack of a fight scene inside Hogwarts at the end of the movie. I understand the director wanting to save all of the inside Hogwarts action for movie 7 (and 8) but seriously, my favorite part about the fight at the end of book 6 is that the DA was out there using the skills they had learned from Harry to protect the castle, not to metion the whole Bill/werewolf thing.

Overall, I think the movie was pretty awesome. Considering they are planning on breaking book 7 into two movies, they should have plenty of opportunitiy to make up for things they left out in movie 6.
Grade A-
Posted by yamsey at 9:08 AM No comments:

finding a name for Obie

I was doing a web search for baby names today and came across my all time favorite baby names website. Check it out here.

There ain't no name like a Utah baby name!

Be sure to read the SL Tribune article link "Different is Good for Utah Baby Names." that accompanies/explains the website- for those of you NOT from Utah.
Posted by yamsey at 11:21 PM 1 comment:

I love my family

I was surviving a particularly rough pregnancy day the other day and then my doorbell rang. This is what I found: 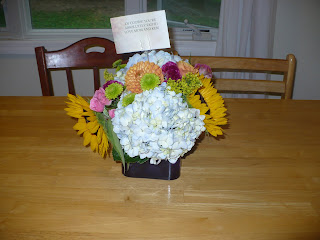 Flowers from Mom and Keri.

My family has been so supportive and sweet during the last few weeks. Between the flowers from Mom and Keri and all of the projects and cleaning that Dad, Anne and Lisa did while they were here, I feel down right spoiled. And don't even get me started on how great John has been... I love my family!

So John and I have this huge picture window flanked by two regular windows in our family room. They are the only windows in our home that haven't been replaced. During last winter we discovered that those particular windows let in the cold better than an open door. So we recently started a quest to find an energy efficient (as in functional AND qualifies for the federal tax credit) replacement.
Have you ever called a window company for a free estimate? First of all you and your spouse both have to be home so they can pressure you into buying the windows that day and you also have to set aside at least 2 hours for the entire process.
We had a guy from Company A come last Saturday. He was polite and knowledgeable and kept his presentation to an hour and a half. But as he was our first estimate we told him we would pass on the quick decision one-time-only-rebate and let him know after we had gotten another estimate or two.
A guy from Company B came last night around 7:45. I was impressed originally that the company had appointments that late but as the night wore on I realized it was a spectacular marketing ploy. The guy was nice and all and knew his stuff (scary how his presentation was almost identical to the first company) but he wouldn't leave! 10:00pm rolled around and as I was obviously very pregnant and exhausted you would think that he would understand and leave when we told him we would like to think about it and get back to him. Nope. He chatted for a while about inconsequential things and then would push again for a decision, phrasing his argument in a different way. Like I said, nice guy but tenacious as all get out! Anyway, he and John started chatting about various ways of financing (starting this conversation by asking about the flatscreen tv that John got on black Friday) and he found John's weakness... He promised a six months same as cash financing to pay for the window. John sat back and smiled, "Now you are speaking my language." Personally, I was ready to let this company replace all of the windows in the house just to get the guy to leave so I could go to sleep. After another chat of nothing in particular (it was about 11:00pm at this point) they got down to it and signed the paperwork. We finally closed the door behind him at 11:30pm!
In all honesty, I like Company B and we have used them before so I am slightly more comfortable with them than with Company A, but otherwise the products were almost identical. The only reason Company B ended up with our business is that they wore us down completely via the late hour and the financing option which Company A never brought up.
So a warning to you window shoppers out there... never, ever schedule a late visit with a window rep unless you are planning on actually buying from them- you could end up with new siding and a new roof as well if you aren't careful, not to mention some serious sleep deprivation.
Posted by yamsey at 12:22 PM 3 comments:

You know, sometimes I really hate people. Please keep in mind I am 36 weeks and 3 days pregnant, but still...

Yesterday I was on my way to the bank. I was driving in the right hand lane of Sproul Road just as a light turned green. One of the two cars in the left lane travelling the same direction, a white pick-up actually, must not have seen me and started drifiting into my lane without signalling or anything. He saw me and pulled back into his own lane but not until he layed on his horn at me for a solid 5 seconds at least. Annoying, but whatever. Anyway, I passed the pick-up and the car in front of them and then pulled into the left lane. As I checked in my rear view mirrow I saw the pick-up trying to pass the car between us via the turning lane. A car was stopped in front of them so they veered over two lanes and was flooring it trying to catch up with me. What the heck? We were coming up on another stop light where some other cars were stopped. The pick-up driver pulled up on the shoulder on the far right and started yelling his head off at me. I ignored him but was wondering what in the world I had done to annoy him so much. I didn't even do anything wrong.

So today I went grocery shopping at BJ's. I pulled into a spot but it was a tight fit as the car on the right was parked illegally in a not-quite-big-enough spot. Anyway, at the end of my shopping with kids fighting all the time and after lifting cases of water and juice pouches and everything, I walk out to my van. The car which had been parked illegally was gone but apparently I had annoyed them and they decided to throw a half-empty soda all over the right side of my van as a parting gift. I got the kids in the van withou them getting all sticky and rearranged the bikes and scooters we had left in the back of the van the other night so I could fit the groceries in. All the while pausing for painful braxton-hicks contractions (which happen every time I bend over or change position of any sort) and fighting tears over how mean people are these days without the slightest provocation. I cried the entire way home, unloaded my groceries, and dragged the hose out of the back yard to spray off the side of my van before the soda dried completely.

You know, there are some days when I just really hate people.
Posted by yamsey at 12:18 PM 4 comments:

Every year we Americans drag ourselves and our kids down to some bug infested park to subject ourselves to half an hour of damagingly loud explosions and bright lights the combination of which causes terror and trauma in our youngest children. And we like it! Maybe it is just me but it seems like a strange way to celebrate the Independence of our country.
This year we went down to the Ridley Park lake (or pond - as I call it) to watch the fireworks. They do a decent fireworks display but there is no patriotic music accompanying the show. I missed the music. A fireworks diesplay without the patriotic music is really just a lot of noise and light with no purpose, in my personal opinion. Samuel, however, was completely enthralled. James, who hates the noise and is terrified of the whole concept, buried himself in our blanket, covered his ears, curled up in my lap and ...fell asleep. Typical James.
Posted by yamsey at 10:51 AM No comments: