Finally!  After years of anticipation we officially broke ground for the Philadelphia Temple on Saturday.  Elder Henry B Eyring from the first presidency of the church presided over the event.  President Jay E Jensen, presidency of the 70, was there too.  Also in attendance the mayor of Philadelphia, Michael Nutter, and several other city officials and dignitaries as well as managers of surrounding properties.  It was quite the event!
A few hundred people gathered at 17th and Vine, an old parking lot that had been set up with a stage and rows of chairs.  In front of the stage was a small carpeted area with two racks of shovels and in front of that was a narrow strip of dirt where the concrete had been removed and a small pile of dirt left in it's place.  The groundbreaking was invitation only but was broadcast to all of the chapels in the area. 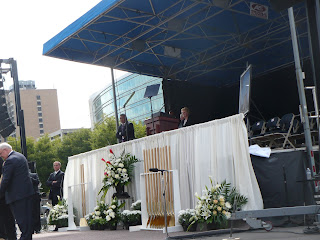 Here's the rundown of the program.  I hope I get it all straight.  I was so excited and jittery (and freezing) that I might not have it all right.
Opening song:  "High on the Mountaintop"
Vai Sikahema, a counselor in the Cherry Hill, NJ stake presidency, spoke about his first journey to the temple with his parents and siblings when he was 5.  It took three days to get to the New Zealand Temple and they traveled by boat, bus and plane.  It was a touching account as was his testimony of the impact the temple has been on his life, the lives of his siblings and of their children.
Elder Smith spoke next about important dates in Philadelphia (and PA in general) history and in Mormon history and events that combined the two.
Elder Walker (executive director of the temple department) spoke about the steps taken to secure the building site of the temple and of the cooperation and help from the mayor and other city officials.  He also told us that Elder Eyring is from Princeton, NJ and how he had grown up loving the Philadelphia area.
The choir sang "How Firm a Foundation"
President Jay E Jensen spoke about the merchant who found the most beautiful pearl and wanted to display it so others could see.  He commissioned a man to build a beautiful wooden box for it.  But when his friends saw it they complimented the box more than the pearl.  Pres. Jensen said that the temple is like the box.  It will be beautiful and it is right to admire it.  However, what is inside the temple is infinitely more valuable.
Finally Elder Eyring gave a few remarks (I'll see if I can figure out how to put my recording of it on blogger) and then dedicated the ground for the building of the temple in a special prayer.  When he finished the sun came out from behind a cloud and shone right down on the parking lot that was now something infinitely more special.
The choir closed with: "I Know that my Redeemer Lived"
I know our church music is not the most exciting- especially to those who are used to gospel music.  But our music carries the spirit and it was interesting to see how the spirit reached those in the audience who are not members of the church.  For example, Mayor Nutter looked bored at the beginning of the song but was completely engaged by the end.  Behold the power of music.  =)
After the closing prayer, Elder Eyring, Pres Jensen and Elder Smith picked up a few of the golden (I know, silly) shovels and officially turned over the dirt, breaking ground symbolically. for the new temple.  Then they invited the mayor and other city officials and neighboring property managers to come up and grab a shovel and turn over some dirt.  Next they invited the six stake presidents from the new temple district to take a turn.  Once that happened they opened the invitation to all in attendance to take turns breaking ground for our new temple.  It was exciting and exhilarating and so, so, so wonderful!  I felt lucky to be there (singing in the choir) but it would have been even better if John could have been there too along with all of our friends who have worked and prayed daily to make this a possibility.
But look at a few friends who did make it: 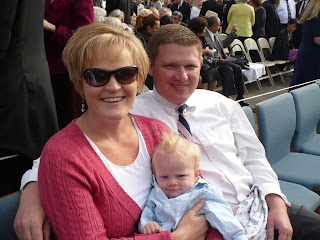 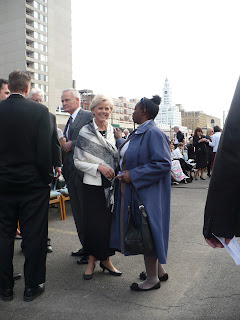 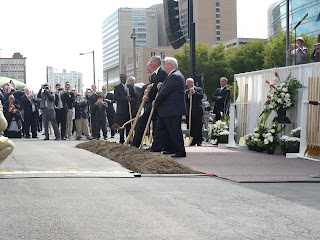 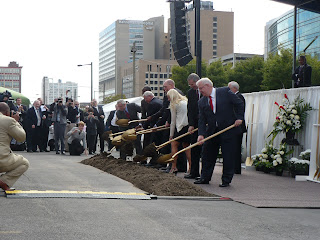 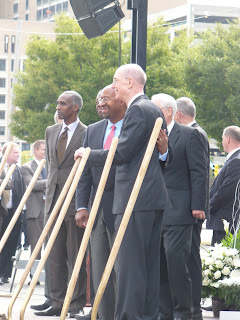 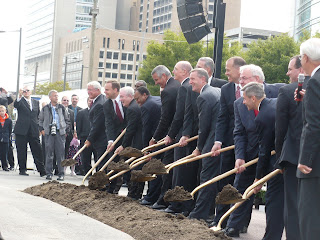 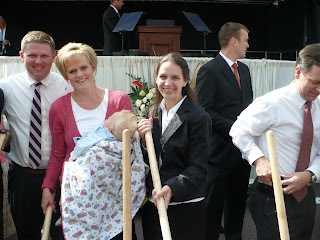 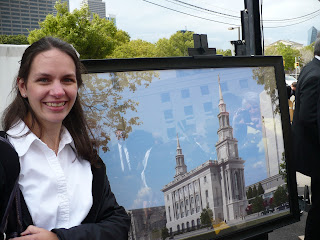 Doesn't the temple look beautiful?
For more information you can go to ﻿www.lds.org/temples
Posted by yamsey at 2:41 PM 8 comments:

There once was a bookstore called Border's
Which was Heaven on Earth to book horders.
Sad to say they went bankrupt one day.
Amazon now receives all our orders.

Where were you on 9/11?  How many times have you been asked this question?  I was on my way to class at Temple University.  As I got off the subway I saw people gathered around food trucks with TVs showing pictures of the Pentagon burning.  The volume was turned down and I didn't stop to ask so I had no idea that there was anything going on other than an accident in DC.  When I arrived at class everyone was chatty and the professor had a hard time getting our attention.  When we finally quieted down, he told those of us who didn't know about what had happened in New York and then excused us to go home and be with friends and family.  This class had over 100 people in it and I didn't know very many of them.  But one girl started crying and someone said she was from NYC.
I began my subway ride home a little nervously.  If they had attacked New York and DC, was Philadelphia next?  We are right in the middle of the other two.  When I was just about to get off the train my cell phone rang.  It was my sister, Keri, calling to make sure that we were OK and that we knew what was going on.  I got home in time to hug my husband extra tight before he had to go to work and in time to watch the first tower fall.  Instead of a day of classes, I sat glued to the news watching the images over and over and over again.
I didn't lose anyone on that day but I have been deeply affected by it nonetheless.  I think we all have.  I remember in college I did a report on JFK's assassination.  I had to interview two people who had been alive at that time and ask how it had affected them.  I didn't get why it was such a big deal.  I thought the conspiracy aspect was far more interesting and relevant than how people felt.  What I didn't understand at that time was how completely a single, shared, tragic experience like the Kennedy Assassination or 9/11 can impact all of us.  In many ways we now measure our lives by pre 9/11 and post 9/11.  Our national imaginary bubble of protection is gone.  My personal imaginary bubble of safety and security went with it.   But I love how the country, and the world, drew together in support of each other.  I just wish it would have lasted longer than it did.  I wish that brotherly love and support wasn't just something we dusted off for one day each September.
My heart goes out to the families and friends who are still mourning the loss of a loved one on that tragic day.  I am eternally grateful for the first responders who sacrificed themselves willingly to save others so they could return to their families and have a second chance to really live.  And I am grateful every day for the soldiers across the world who watch over us and fight daily to protect us from the recurrence of such an indescribably horrible event.
Our church put out this very moving account of a 9/11 survivor and how it inspired him to really look at what was important in his life.  I suggest you take the time to watch it.
Some great literature I have read that covers 9/11:

A fictional story about a boy who lost his Father on 9/11.

From the Story Corps project.  It is transcriptions from all sorts of people and includes a story from a survivor and a story of someone who lost his fiancee that day.
Posted by yamsey at 9:20 PM 1 comment: