must be baseball season

Forget about football.  Right now in Philadelphia the Eagles are barely a second thought (sorry Brother Reid, but its true!) because the Phillies are in the World Series!  Yesterday, before game one, Phillies Phever was EVERYWHERE!  I went to John's office for lunch and as his patients came in every one of them was dressed in Phillies gear.  I sent the boys to school in their Phillies shirts.  People on the street were dressed in red and could talk about nothing else.
And Game 1 did not disappoint!  The Phillies quite efficently handed the Yankees their hats and showed them to the door- in their own stadium!  Lee was incredible, so cool, calm and collected.  You would have thought he was out for a Sunday afternoon stroll, not pitching in the World Series.  He had amazing stats and even made a couple of defensive plays (did you see the behind-the-back catch???) effortlessly.  It was baseball at its best!
I was raised on baseball.  My Mom loved the game when she was a kid (she even collected baseball cards) so when I was a kid and the World Series rolled around, our house became baseball central.  For dinner we spread a tablecloth on the floor in the family room in front of the tv and we ate dinner to the sounds of "STRIKE ONE"!  It was great.
Last night I sat on the sofa with my three boys and watched the first inning with them as they debated who their favorite player was.  (They both decided on Ryan Howard but I am more partial to Cliff Lee or Jason Wirth.)   It was a fun sense of deja vu and of things to come as the boys get older.  Say what you will about baseball.  It may have its problems but it is still America's favorite pasttime- at least it is in our house. 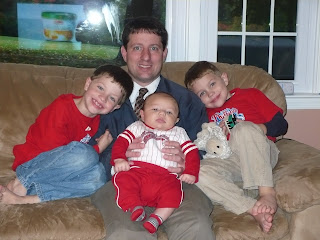 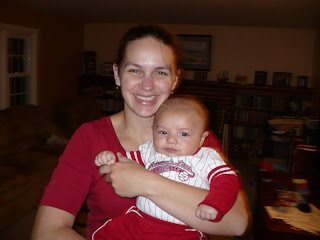 Last weekend we held our 2nd annual pumpkin party.  We invited a combination of church and school friends.  Samuel and James were very opinionated on who they wanted at the party- if it were up to Sam we would have invited his entire school class.  =)  James just wanted his friend Gracie to come- unfortunately her mom called the morning of and had to cancel because they were sick.  James was pretty devestated but he managed to rally and enjoy the party for the most part.

As usual we had activities for the kids.  Decorating cookies: 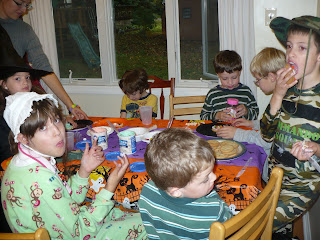 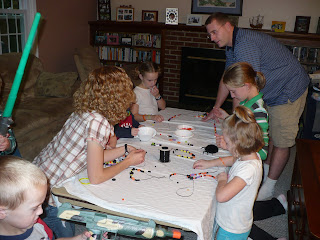 And painting pumpkins.  Of course, some of the kids painted themselves more than the pumpkins.  We may have to rethink this one for next year as the pumpkin paint is not exactly washable. 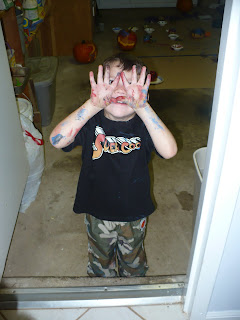 And don't forget the pumpkin carving!  We had some real winners this year. 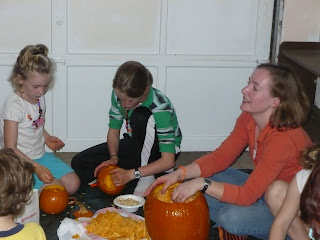 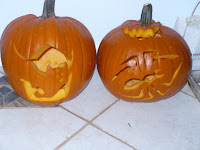 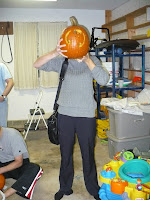 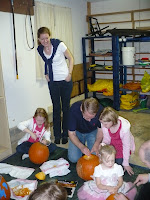 Matthew was passed around from person to person.  He was in heaven since he just loves to be the center of attention.  Of course, he got to share that title with the other little guys at the party:  Lukas and Spencer. 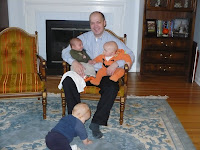 We hope everyone had as much fun as we did.  See you next year! 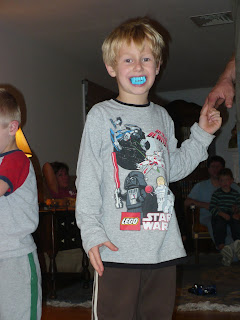 Posted by yamsey at 9:43 AM No comments:

I know I haven't been great about posting lately- chock it up to exhaustion induced braindead-edness.  I shouldn't complain with Matthew sleeping through the night and all but I am TIRED!  When I finally go to bed at night I am completely dead to the world in a matter of seconds which is unheard of in my insomniac past.  I am so tired I can't even read- also highly unusual for me.
On Sunday, a particularly busy day after an incredibly busy weekend, I was attending some meetings for the Messiah and stake activities from 6-8:30pm.  I was so completely wiped out at that point that I couldn't put a coherent thought together despite my best efforts.  I am surprised that I wasn't committed for spouting jibberish.  It is really crazy.  When I get this tired it is like someone builds a literal wall inside my brain separating my thoughts and my ability to communicate.  Words and names completely escape me and forget about me trying to remember new information!  That isn't even a remote possibility.
Does anyone else ever feel this way or is this a uniquely bizarre Erin brain issue?
Posted by yamsey at 10:18 AM 1 comment:

Yesterday was the big four ward and one branch sacrament meeting.  We entered the building as B1, B2, P1, P4 and the Chester Branch and left the building as the Broomall Ward, P1, P4 and the Widener Branch.  Broomall 1 was basically portioned off into the other four units.  From B1 the Lower Merion school district joined P4, Haverford school district joined P1, Ridley school district including Prospect Park and areas all the way up to the airport joined the new Widener Branch, and Springfield and Marple Newtown scholl districts joined Broomall 2nd to create the new Broomall ward.
There were also a few boundry changes in the wards that remained.  I don't have the paper that has all the zip codes of the specific changes- I'll have to ask John for that later.  But basically Lansdowne was taken from P4 and put back in P1.  There was a small city section of P1 that was put into P4.  And Broomall lost Brookhaven and Aston to the Widener Branch.
Basically all of the old, odd boundry lines were wiped clean.  The city wards were finally given the extra support from the suburbs that they have needed for so long and the Widener Branch gained enough people for them to function well.
It is going to be a difficult transition for some- especially the teenagers from B1 who are now part of the city wards.  There were a lot of teary eyed young women yesterday.  There were also quite a few teary adults.  This kind of change is so hard, especially socially because a lot of our friendships are based on who is in our ward.  When P4 was created out of P1 four years ago I was an absolute wreck because a lot of my friends were put in P4 and I was still in P1.  I felt completely abandoned.  I wasn't, but that was how it felt.  I know some of the people who were moved into the branch and the city wards yesterday felt the same way.
Honestly, I feel that these boundry changes are inspired.  Two wards and a branch that were struggling from lack of manpower now have what they need to really thrive.  Bravo to our stake presidency for taking the steps necessary and chancing the murmurs from a few to do what is best for the stake as a whole.
Posted by yamsey at 8:10 AM 10 comments:

I took Matthew in for his two month checkup yesterday.  Here are his stats:
weight 14lb 5oz (92 percentile)
height 25in (80 percentile)

He is a total chunk but SO cute!  He loves it when we talk to him.  He will smile and coo back when we do.  Yesterday morning while we were having breakfast he was upset because we were all at the table and he was stuck in his bouncy seat.  He wanted to be a part of everything.  I bet you he walks before Sam and James did just because he doesn't want to be left out. 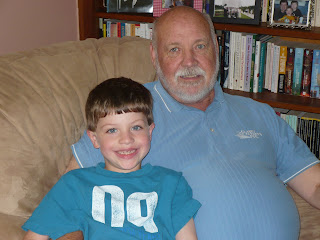 I know first graders are not all that old, so why do I feel like Samuel is all grown up? He can read now and do math and on Sunday he rode his bicycle to school all by himself (Ok I was following behind him in my van like a lunatic. But still...). It is not just that he is doing these things. I guess his grownuppedness (is that a word?) stems from the fact that he is gone all day Monday through Friday and is creating a life independent of his life here at home. He has friends I've never met and experiences I know nothing about. And, quite frankly, I am not ready for it! I know this is the plan but part of me wants to keep him little and innocent forever.
Posted by yamsey at 2:52 PM 1 comment:

I was listening to the traffic report this morning when they announced an accident on I-295 South with a gaper delay on I-295 North. If you aren't from a big city you might question the need for such terminology. Can people slowing down to look at an accident really cause a traffic jam so bad that it is worth making up a term for it to use for the traffic report? The answer is yes, absolutely. I actually think it is the perfect metaphor for our society at the moment. We are all in the midst of a gaper delay- or causing one. Sometimes it is hard to tell the difference.
It brings to mind the story I heard on NPR the other day. There was a boy in Chicago, an honors student, on the way home from school. Call it the wrong place at the wrong time if you will, but he happened upon a fight. The boy ended up being beaten to death. So where's the gaper delay in this story? A passerby caught the entire incident on his video phone! He stood and watched a teenage boy beaten to death and recorded every detail. What about calling the police? What about finding someone nearby to help break up the fight? Nope. This camera man did what we see more and more Americans doing these days, stand by and watch. What's worse? He gave the video to local news channels and they showed the video, including the actual death of this poor boy! What is wrong with people?
Posted by yamsey at 8:37 PM No comments:

First grade has brought a slue of new experiences for our family. The first one being how dang expensive it is to have a kid in school. Yes, he is in public school but maybe private school would be less expensive in the long run. OK, yes, I am exaggerating but take this week for example. This week there was a mini fundraiser to buy mums ($6 a piece), an offer to buy a school directory ($7), a full blown fundraiser from Innisbrookwhich we felt compelled to buy something ($19-$44), two flyers were sent home for upcoming activities/fundraisers for the next two weekends not to mention money for lunch because Sam insists that he needs to eat hot lunch because all of his friends do. Is this normally how it is or do we just have a fundraising obsessed school?

So while I am sharing I have to say Sam's schoolwork has me totally stressed out! His homework takes an hour most days (yes, an hour!) which is hard to fit in with soccer practice and dinner and any sort of family time. But most of all, I think his teacher is underestimating his reading ability. She has him in a reading group that I think is stage 1. His flashcard words are: a, by, and, the, we, me, they... He knew those words before he started kindergarten! He is reading more around a stage 5. Maybe I should send in to school one of the books he is currently reading at home. I just don't want him to get bored and intellectually check out or hate school because it doesn't challenge him. I wrote a note to his reading group teacher, hopefully she will give him something a little more challenging. If not, maybe I will go into class to observe. He is too young to pretend to be slower than he is so he doesn't stand out in class, isn't he?
Posted by yamsey at 8:35 AM 1 comment: