boys will be boys

Warning: The following post may not be appropriate for all readers.

The other day James (age 4) was reaching his hand down his pants. I looked at him exasperated and the following conversation ensued:

At this point John and I dissolved into hysterical laughing... I don't know, maybe you have to be a parent of young boys to get a kick out of this. =)
Posted by yamsey at 9:57 PM 4 comments:

Today is James (the tick magnet*) Traverso's birthday. I can't believe my little guy is 4! He had an extra fun birthday today because Daddy had the day off from work and we had a pancake breakfast and a picnic to celebrate Memorial Day AND we took him to Chuck E Cheese. All that combined with a few little presents made James one happy boy! 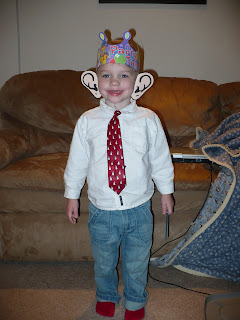 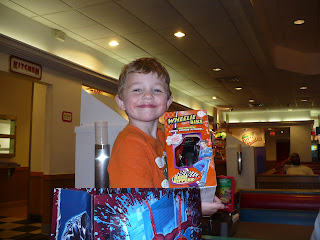 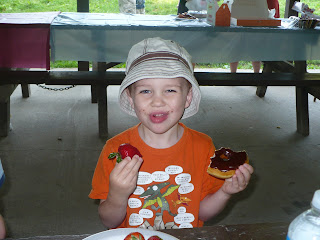 a breakfast of champions (strawberries and donuts... Yum!) 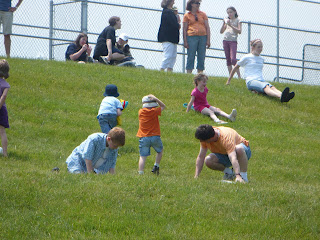 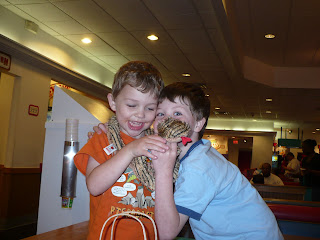 *The Tick Magnet was not a typo. I just pulled the second tick off of James this month. Geeze we can't take this kid anywhere!

Posted by yamsey at 8:07 PM No comments:

So this last week Samuel had two days of a high fever (102+ degrees) followed by a rash all over his stomach and back. The rash is not itchy or painful in any way, just a bunch of red spots that happen to be there. I talked to the pediatrician and double checked with John and the verdict: just one of those random childhood viruses. Whatever!
Maybe it is just me but I don't remember ever getting any of these random childhood viruses when I was a kid. Is this an east coast thing or have they become more rampant over the years?
Thank goodness this virus is at least benign. Heavens forbid we go through Hand, Foot and Mouth again!
Posted by yamsey at 8:56 AM 3 comments:

You know how in the old days when a girl got pregnant and was sent away from friends and family only to return after the baby was born? I finally get it. It was not because the family was ashamed. Oh no! They were actually sparing the poor girl from the embarrassment of growing big and fat in front of all of the people she knows. And confinement? You know, that last month of pregnancy when they would shut the woman in a dark room? It was just to spare her the necessity of finding clothing that would fit over her bloated belly.
Case in point: I have a pair of pajama pants that look and fit better on me than anything else in my wardrobe at the moment. However, if I wore them every day to the grocery store and the mall and to church I would get some odd looks. If I were sent away to the middle of nowhere for the duration of the pregnancy or at the very least didn't have to go anywhere for the last month, it wouldn't matter if I just sat around in my pjs all day.
If you can't tell, I have hit the point where I am DONE being pregnant! I am tired of feeling like a beached whale and sick of the incredulous expressions on people's faces when I tell them I have three more months to go. Yesterday I was thinking I would put myself in exile until I have had this baby. Either that or you might just see me wandering around in my pajama pants, regardless of how sloppy it looks...

Thanks for letting me vent. =) I promise, the next blog will be more upbeat.
Posted by yamsey at 9:39 PM 4 comments:

My sister Lisa came up for a couple of days this week. There was a special program for homeschool kids at Valley Forge National Park so the boys and I went with her. It was beautiful - for the first time all week - and we actually learned some cool details about the encampment of Washington's army.
Anyway, when we were home hanging out I helped Lisa with a little project she has been working on since December. Her husband, Tracy, had a grandmother who had started a piece quilt and never finished it. Tracy's Mom gave it to Lisa in hopes that she could finish it. Lisa wanted to have it finished in time for Mother's Day. By the time she brought the quilt up to Philly this week she was ready to hand stitch the binding. We spent at least 5 hours hand sewing the binding of the quilt, finally finishing this morning around 10am. It was so much fun to work with my big sis on a project and the sewing was just what I needed to make my nesting compulsion subside - for a day or two. =) I love having one of my sisters so close. Keri, don't you want to move back east again???
Oh, and note to self: next time just machine sew the binding. Holy cow! That was a lot of work!
Posted by yamsey at 2:42 PM 2 comments:

Stupid Vista! The new laptop has Windows Vista which apparently has to be treated as a delicate piece of china. If you read on the iTunes website there is actually a different download for Vista 32bit and Vista 64bit. Go figure. We deleted all of the music off of my hard drive and uninstalled iTunes just so we could reinstall it with the correct version.
My iTunes is working great now!
Posted by yamsey at 9:20 AM 3 comments:

I downloaded the iPod software to my new computer the other day and transferred the music from our old computer hard drive as well. Somehow in the process I also managed to add the folder of sample music that came on my computer into my iPod library. Now I can't seem to delete it. Help! I have no idea why it won't work. I select the music, click on edit and delete is not an option. I checked the manual online and it said to select the song and click delete or back space on your keyboard. That didn't work. Right clicking doesn't offer any options either.

Please Help!! I am pulling my hair out here! My computer is too new for me to be throwing it out of the window this soon!!!
Posted by yamsey at 8:18 PM No comments:

I am secretly a big fan of pagents- probably because I grew up watching my sisters compete in them. I love the gowns and the talent portion, the interviews and the anticipation... the swimsuit part I could do without, but then how would they ever get males in the audience?!
Anyway, I did't see the Miss America Pagent this year but I heard about the controversy and had to share. Apparently a judge asked Miss California her opinion on gay marriage and this was her answer.
Gay marriage is a difficult topic for me because I have some very dear friends who are gay and I want nothing more than their happiness. However, I was raised very strictly religious and I have a difficult time reconciling the two ideas. But how I feel is beside the point.
What I admire about Miss California is that despite the possibility that her answer would destroy her chance at winning, she held true to her beliefs and shared her honest opinion on the subject. Whether the topic is gay marriage, abortion, the war in Iraq or any other argumentative subject, holding true to your beliefs in front of millions of people, knowing you would be raked through the coals by the press either way, takes a lot of guts. This beauty queen has an impressive strength of character!
Posted by yamsey at 9:46 PM 1 comment: