I am ashamed at how I have neglected my blog lately. I am supposed to be resting right now as I have been pretty ill for the last week, but I wanted to update first.
We are currently at my parent's home in Utah. There is something about being home that just makes my heart happy. Even though this house is not the one I grew up in, Mom and Dwane make it feel as if it was. Mom works so hard to have everything just so that Christmas with her, in their house, is always extra special.
There is also something about being back in St George. Although I ran away from this place as quickly as possible after high school I will always love being here. The glow of the sunrise on the red sandstone hills with the snow covered peak of Pine Valley Mountain rising behind them is something truly spectacular to behold. The beauty of this place does not rely on the trees and various vegitation to make it beautiful. Its beauty is in the wide open spaces, the shapes of the hills, and the unexpected colors that mix together in a new and fascinating way.
Although we found our dream home in PA and will probably be there forever, this is and will always be home.
Posted by yamsey at 5:54 PM 3 comments:

We did not have the time or energy to put a letter in our Christmas cards this year. So, here is a quick update on the crazy goings-on in our little family.

James (aka Darth Maul) turned 3 this year. He is mischivious and so adorable that he doesn't get in trouble for it either. His favorite things to do are sing (mostly the Star Wars theme song), act out Star Wars movies (he is always the bad guy), play Star Wars Legos on the XBox 360, follow Samuel around the house calling him Master Kenobi, and playing outside. Hmmm... is there a theme here?

Samuel (aka Obi-Wan Kenobi/Luke Skywalker) is a very grown up 5 years old. He finished preschool and started kindergarten this year. He loves school and would rather be there than home with me and James. Samuel also had the chance this year to play t-ball, soccer and has just started wrestling. He enjoys sports a lot, especially because John is involved in the coaching. Sam likes to draw, sing, play Star Wars with James and Daddy, and have play dates with his friends from school.

Erin (aka Mace Windu/Mom) has had her hands full with the move this year. The beginning of 2008 she spent her time repainting the old house so that we could get it on the market, keeping it spotlessly clean so we could show it to potential buyers, and searching for our dream home. Exhausted by the cleaning and packing to move, Erin has sworn off ever doing this again. In her non house-related time, Erin is still doing music at church. She was called as the ward choir director in our new ward and is also serving as the stake assistant music chair. She just survived her first major project - the Stake Messiah sing along, and hopes they plan to release her from this calling before next Christmas! =)

John (aka Yoda/Qui-Gon Jin/any other character needed at the time) has had a busy year as well. In addition to the move, John has been bombarded with work and his calling in the church. In March he was released from the Bishopric in P1-yay!!- only to be called onto the high council a short 3 weeks later - sigh. (No, seriously, he enjoys his new calling we just miss him on those busy Sundays.) John has continued to build his patient base at work and also added a few nursing homes to his job this fall. In his free time he coached Sam's soccer team and is an assistant coach at wrestling as well.

As a family this year we took some time to have a little fun too. We went to Myrtle Beach in June for a week (in theory for a medical conference but the kids and I tagged along to make it fun) and we are spending Christmas in Utah with Erin's family. We are loving our new home and invite all of our friends to drop by for a visit some time soon. We miss you and we have a guest room so there is no reason not to. We hope you had a Merry Christmas and that the New Year brings joy and happiness to you and yours!

I feel like the entire time period between Thanksgiving and Christmas is more like a marathon than a holiday. I am glad to say that we have completed the race in good standing and are ready for the reward- heading to Utah!!
The stake Handel's Messiah sing along was a success. We had a few glitches, but the spirit carried us through. Last Sunday John also had to speak for high council and I had to sing. Good thing it was last week as I have no voice this week.
Today was our ward Christmas program. It went really well, again there were a few hiccoughs, but now it is over, done, finito, kaput. Hallelujah!
Now all we have to do is make some cookies, pack, and pray for a working airport so we can fly home to Utah on Wednesday. If any of you have some pull with the weather gods please beseech them on our behalf!
Posted by yamsey at 4:21 PM No comments:

The news center has been a little busy lately, sorry for the delayed update. Lamby the Sheep was rescued from an uncomfortable, unintentional hiding spot last Friday. She was stuffed between Samuel's bed frame and the radiator, upsidedown. We have no idea how she got there, but we are very glad to have her back!
Posted by yamsey at 4:17 PM 2 comments:

Have you seen this lamby? 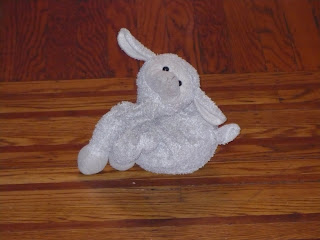 Lamby the Sheep went missing late Thursday morning according to officials. When best friend of Lamby, James, was asked about her disappearance, giant tears welled up in his eyes as he said, "I want Lamby to come home soon!" 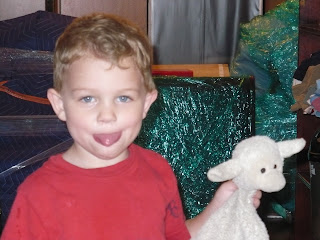 Lamby was last seen in her home, but after searching everywhere her family can not find her.
If you have seen Lamby or heard from her please contact the authorities as soon as possible. James misses her dreadfully!
Posted by yamsey at 8:31 PM 4 comments:

I am a voracious reader. I can actually track the beginning of my love affair with the written word back to a particular moment in childhood. My brother Jared and I were fighting over the TV; he wanted it off and I wanted it on. We stood there flipping the switch off, on, off, on, off, on, until we hear a soft pop and the screen went gray. The TV was dead- not broken, but completely dead. Although Mom claims it was only 6 months, we endured what must have been, at the very least, a year with no TV. That is when I started reading.
My mom is also quite a reader so I began with all of the kids books we had in the house and then continued on with Mom's numerous bookshelves. I think the only series she recommended I hold off from was Dune. I was still pretty young and she was afraid it would give me nightmares. At any given time of day or night you would find me curled up with a book. I often brought one to the dinner table (hidden on my lap), to church and any ride in the car.

I would willingly go to bed at night--my parent's just had to confiscate the flashlight and my current book in order for me to go to sleep.
As I got older I figured out something that I received while I was reading: a means of escape. My life is not awful by any stretch of the imagination, I am actually quite happy for the most part. However, in difficult times (ie: my parent's divorce, bouts of depression, a bad break-up, etc.) I have found I can read myself through my frustration and pain. Reading gives me a place where I can go to not think, to clear my head, to live on borrowed emotions until I can regain some perspective. Sometimes a good book for me is just a place to hide for a while.

That is part of the reason why when reading for fun I choose light and mostly happy material. Granted I was a Russian Lit major, but reading for school is a completely different story.
Does you have a favorite escape?
Posted by yamsey at 3:20 PM 2 comments:

We spent Saturday in The Big Apple. We dropped the kids off with the Waddell's (thanks guys!) and John's parents took us into the city to see a show. The show was ...interesting. For more information you will have to talk to me in person. I have been forbidden by my husband to broadcast that we actually saw this show. =) But we had a great time and really enjoyed the city. It is so beautiful at Christmastime. We were also happy to spend time with Annalee and Chris. They live in this really cool high rise apartment building in New Rochelle. James keeps referring to it as "Noah's Tower." Of course, Sam thought he had died and gone to heaven since he got to play with Noah again. Even James was thrilled to see the boys, he didn't even notice when we left. I can't remember the last time that happened!
Two weeks from Wednesday and we get on a plane bound for Utah! Woo-hoo!!!
Posted by yamsey at 10:32 AM 8 comments:

Somewhere in the middle of insane Black Friday Christmas shopping, cleaning up pee and toys and clothes, wiping up little mud prints and reraking leaves for the umpteenth time I had an epiphany: I really love my boys. I mean, seriously, how could I not? 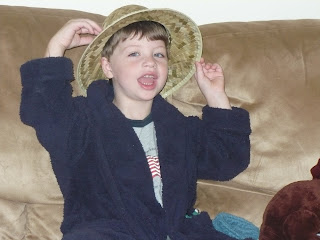 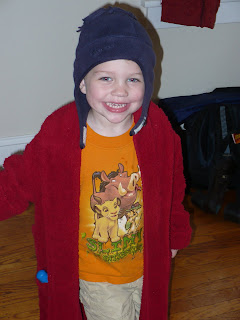 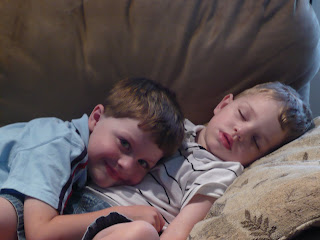 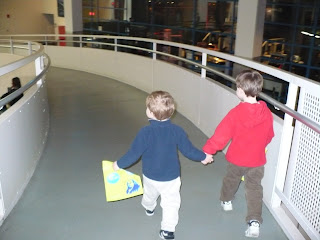 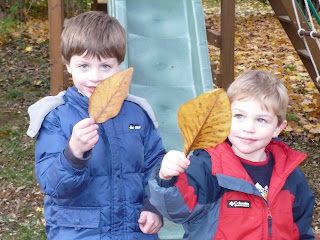