Last week we had a family reunion (with my family- minus my Bro and Sis-in-law and their son (they are expecting)- which was 25 people in all) in Yellowstone.  We made plans about a year ago and John has been looking forward to it with great anticipation since then.  Usually my sister, Keri, plans the family vacations but we begged for the opportunity to be in charge because John wanted to make sure he did not miss a thing.  And I can honestly say- after a week of being home from vacation and STILL completely exhausted- that we did and saw everything you can possibly fit in one week.

Monday: Old Faithful and surrounding geyser basins, ice cream in Old Faithful Inn, drive around Firelake Dr and home for dinner.
Tuesday:  Norris Geyser Basin, Mammoth, Roosevelt Corrals for horseback or coverd wagon ride to a chuck wagon cookout.  Yum!
Wednesday:  Fishing day for some of the family and swimming in Firehole River.  John and I, Samuel, James and my Mom went ziplining and white water rafting.  That is a separate story in and of itself. Amazing!
Thursday:  Artist Paint Pots, Grand Canyon of Yellowstone, Hayden Valley and the mud volcanos, drive by Yellowstone Lake and back to West Yellowstone for a rodeo.  John got suckered into a dance contest at the rodeo and won!  This still has us all laughing!
Friday: Big Springs in ID, Bear and Wolf enclosure in West Yellowstone (we didn't see either in our travels around the park although we did miss bears by just a few minutes on two separate occasions), a little shopping and some of the kids completed their Jr. Ranger badges.  We packed up for an early departure for Grand Tetons the following morning.
Saturday:  Goodbye Yellowstone, Hello Grand Teton National Park.  The mountains were breathtaking.  Literally and figuratively.  We took a ferry across Jenny Lake and did the mile hike up to Hidden Falls and Inspiration Point.  It was inspiring.  No, really!  Matthew hiked the entire mile back down by himself!  Dinner in Jackson Hole, WY and watch a play gunfight in town square.  Leave Jackson around 7 and drive back to Keri's house in SLC.

Wow!  Just typing it makes me tired!  We had a really great time.  And although it required a lot, and I mean A LOT of driving, we had a great time!  Pictures to come... we uploaded the camera cards from everyone so we have roughly 1500 pics to choose from.
Posted by yamsey at 10:24 PM 6 comments:

Earplugs in place, a shark cap on his head
a tentative toe dipped into the cool water.
"I'm not sure I want to do this..."

Big brother mere feet away bobbing in the pool
"This is great!"  Climbing out only to jump in again-
Fearless and laughing.

Big breath, try again.  Down one step, then another.  Look Mom!
A big grin, two thumbs up.  One more step. I'm in!
Wait, you want me to swim?

Look to Sam again- kicking across the pool, loving it!
Sliding down the slide, floating on his back, learning strokes.
He's a fish.

Grasp the float and kick across the pool.  Hey, not too bad.
Face in the water?  I can do that!  Blow bubbles- I'm a pro-
This swimming thing's ok.

I love to write.  I love to blog stories about my family.  I also enjoy the interaction I have found on Facebook with friends both old and new from all over the country (and world).  For a while I was trying to maintain both FB and Blogger, but for the last 6 months clearly FB has won.  Let's see what I can do to change that this summer.

Here is a quick family update for anyone who is curious: 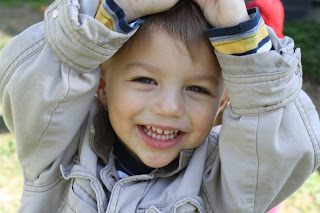 Matthew is almost three, as adorable as ever but so strong willed that all of the patience I didn't learn with my oldest two is now being tested in spades.  He still loves his Mickey Mouse but is branching out to Doc McStuffins and Little Einsteins. His favorite shirt to wear is his Phillies shirt, Halladay, of course!  He loves to read and to "ride" his bike - really it is a bigwheel and his feet don't reach the pedals yet so he shuffles his feet to move it around.  He loves to swim (have me hold him up in the water while he kicks his legs and moves his arms), and he LOVES any time with his big brothers and daddy.  He will play bey blades and legos with the big boys for hours just to be a part of the action.  Oh and he is obsessed with Mario Karts on the wii and has gotten to the point where he can almost finish a race.  He also tells everyone he talks to that he is going to be Yoshi on a bike.  (Not something for me to be proud of - too much video game time in the house in general - but that will change this summer.  Honestly!) 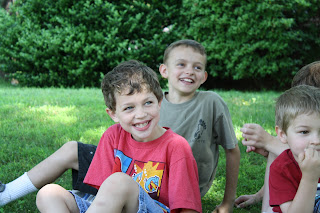 James, now seven, just finished first grade.  He had the sweetest teacher and a very friendly but mellow class.  I know, when was the last time you heard a first grade class described as mellow?  I wouldn't believe it either if I hadn't seen it myself!  His favorite food in the world is strawberries and he still loves the color red- as evidence by most of his wardrobe.  James loves playing bey blades, legos, Skylanders on the XBox and Mario Kart on the wii (He is Matthew's trainer).  He is taking swimming lessons for the first time ever this summer (with wax earplugs and a swim cap to protect the tubes in his ears- yes, set #3) and is starting to get a little comfortable in the water.  I can't wait to see how he does at the end of the season!  James is my shy, timid boy.  It has been fun to see him break out of that a lot this year at school.  He won an award for a story he wrote which was included in the school portfolio at the end of the year.  He loves to read and is proud that he is finally learning how to do some of the things his big brother, Samuel, knows how to do.  Next up on the list:  piano lessons.

Samuel, my grown up nine year old, just finished third grade.  He has hit that age where he definitely isn't a little kid anymore but he isn't a preteen either.  It is an interesting stage of limbo.  Sam likes to be given responsibility and will help with his little brothers (most of the time) when asked, but he also likes to tease them and push their buttons and basically do all of the normal big brother stuff.  He is so smart and has a very logical, methodical mind- just like his dad.  He did great in school this year and really enjoyed his class.  He had an amazing teacher this year too.  I actually begged her to move up to fourth grade next year so I know Sam will have someone wonderful again.  Samuel LOVES legos.  He actually told me that he didn't want to play soccer this spring because he wanted to stay home and play legos.  Obviously, that didn't fly with me, but I thought it was cute.  Samuel just got his Wolf badge in cub scouts and is continuing to do a very good job with piano.  This weekend Samuel went with John to a friend's beach house, he was in heaven because the one thing in the world Sam loves more than legos is time with daddy! 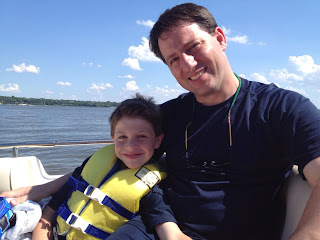 John is continuing on as a workaholic. (I'm only partially joking!)  He is still working full time at the office, as well as rounding at three different nursing homes- one of which appointed him as their new medical director, and serving as stake clerk at church.  He still makes time for us- he coached the boys' soccer teams this spring, and for himself- he is playing softball on the LDS team in a local church league (yes, the same team he has been playing on since Tom Riley got him started).  In his free time he takes care of the yard and fixes stuff around the house and drags us out for bike rides or to play tennis.  Maybe busy is an understatement.  Currently he is most looking forward to the family reunion we are having with my family this summer- in Yellowstone.  Yes, he does have the entire week scheduled to the minute! 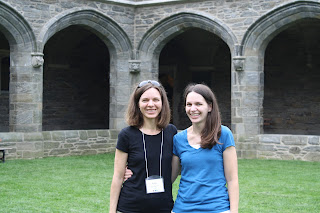 As for me, I have mostly been kept busy with the boys and running them to school, piano, soccer, scouts, swim lessons, play groups, swimming lessons, etc. -just like all of my mommy friends out there.  I have also been working on ideas for redecorating the house.  They are slow moving plans- as time and money allow- but I am quite thrilled with the changes that are beginning to occur. In about 10 years I should have everything just how I want it.  I am still quilting a little, doing book club and I am also serving in the Relief Society presidency at church with some really great women.  Enough to keep my busy for now.

It has been a great and eventful year.  I am hoping to get back to regular blogging but life is unpredictable and crazy so how much of it gets blogged vs updated on Fb... well, we'll see!