James and Samuel LOVE their stuffed animals.  They take their animals everywhere with them.  The animals function as toys, playmates and security blankets.  Since James is more than a little shy and was incredibly nervous riding the bus this year, we made a deal (the same deal I made with Samuel when he started kindergarten):  he is allowed to take a stuffed animal with him to school every day as long as the animal stays in his backpack at all times while he is at school.
This deal has worked really well for James.  Having a favorite animal with him gives James a little extra confidence and if he is sitting by himself on the bus he has something to keep him occupied.  We have not had a single problem with this arrangement until last week.  On Friday, the day before our week long spring break, James was distracted (one of his friends threw up on the bus) and he accidently left Cowie (the animal of choice for the day- a cow webkinz) on the bus.  His regular bus driver, Mr Tony, (who normally says goodbye both to James and his animal) was not driving.  I realized James was missing Cowie just as the bus drove off.  I ran inside, grabbed my car keys, and we hopped into Homer, my trusty Honda Odyssey, to take up the pursuit.  The problem is, at the end of our street there are three possible ways the bus could have turned.  I guessed one way and we zoomed around the corner.  No bus.  I flipped a U-y and went down another street.  No bus.  At this point James had tears streaking down his cheeks.  I tried another way.  No bus.  I pulled over to the side of the road, fished out my cell phone and called the school district transportation office.  I quickly filled in the woman who answered.  She was very sympathetic and promised that she would get Cowie off the bus herself as soon as it arrived back at the depot.  About ten painful minutes later she called to let us know Cowie was safe and we could come to pick her up (yes, Cowie is a girl stuffed animal (I have no idea why)) anytime.
We picked Samuel up at his bus stop and headed off to rescue Cowie.  James spent the brief car ride filling Samuel in on the drama.
The reunion between James and Cowie brought smiles all around.  The people at the transportation office were so kind and the extra effort they made to save a beloved (inanimate) family member will never be forgotten- at least not by my sweet five year old. 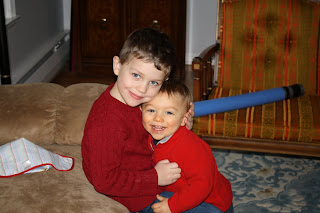 So yesterday Matthew wanted some noodles.  I put some on a plate and gave him a fork and sat him on a chair at the table.  (He is refusing to sit in his booster seat because he does not like being strapped in.)  He promptly dumped all of the noodles on the table, climbed off the chair, took his plate and fork over to the sink and tossed them in.  Then he returned to the table and ate all of his noodles.  I just stood there and cracked up.  We have been working with Samuel and James on clearing their dishes after every meal without being asked.  I guess Matthew has officially entered the "monkey see, monkey do" phase!
Posted by yamsey at 10:51 AM 1 comment: 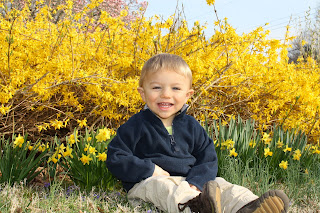 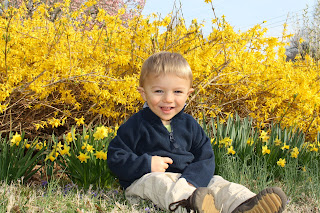