happy birthday to me!

Today we celebrated my __th (fill in the blank) birthday! I have officially hit the age where I will not freely admit how old I am. =) The boys woke me up with a treasure hunt to find my birthday present and breakfast at a nearby diner. We spent the day in the beautiful sunshine watching Sam play soccer and enjoying time as a family. The day ended with John taking me out to dinner for some super yummy asian food at Pei Wei. I don't think I could ask for a better birthday!
Here are just a few fun pics of our day. Enjoy!
We call this one "fun with pipe cleaners." John and the boys gave me a scrapbooking cart and some fun craft supplies for my birthday. The pipe cleaners were a big hit!
Our little family after a day in the sun. Where's James? Asleep! Of course!

I think this is the first pregnancy picture we have taken of me since Christmas. I am in the sixth month somewhere around 24-25 weeks, I think.
Posted by yamsey at 10:03 PM 2 comments:

So if the baby were born today he would officially be named: Obi-Wan Tissue Box Steven Anthony Hungry Traverso... according to the kids... and John. Oh, and don't forget to pronounce Anthony as ant-knee. Think Sylvester Stallone in "Oscar."

John and I are in the we-should-really-come-up-with-a-name-but-just-can't-find-one-yet phase. Although we have had some good laughs out of trying. One friend suggested Luke just so that John could say, "Luke. I am your father." Too funny, right? Mostly we just joke about every name we could possibly NOT name the kid. For instance, our old favorite: Zachary Issac Traverso. The name itself is not too bad, but can you imagine the teasing that would insue when we monogramed his backpack with his initials?!

and our new favorite:
Peter Anthony Traverso who we would call Patrick. Go figure.
Posted by yamsey at 9:24 PM 3 comments:

opinionated and then some

After reading Becca's blog about husbands and their opinions... or lack thereof... I was inspired to blog our latest dilemma: paint colors for the baby's room. (Dialog is not exact as I am suffering from placenta brain at the moment.)

Me: John, I have the baby's room all ready to paint. Do you think I should paint it like the nursery in our old house?
John: (Uncomfortable) Ehm..
Me: What?
John: You're going to put up the wallpaper border again? Huh. I wasn't really wild about the colors on the walls in our old house.
Me: Even in the nursery? That room was seriously my favorite thing about that house! (It was stinkin' cute! Check out the pics below for proof.)

John: Well, I just don't like colors on the wall. Why don't we just keep all the colors in this house the way they are?
Me: (Exasperated) Because it is boring! Beige and white doesn't add anything to the room. I don't have to do two colors in there. I could just do one. How about I use light colors instead? Would you like that better? How about this light yellow color for the nursery? It matches the wallpaper border and the bedding.
John: I like white.
Me: How about this light green? It would bring out the colors in the comforter.
John: How about white?

I think you get the picture! So I am all ready to paint the baby's room, I am just waiting for the paint color debate to resolve. Yeah right! So if any of you women out there are frustrated because of your husband's lack of opinion, feel free to borrow mine for a few hours. It will change your perspective drastically. Don't get me wrong, I like that he cares if I keep my hair long and how the house looks, just sometimes it might be easier to get things done around here if he didn't care! =) 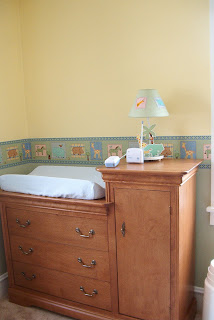 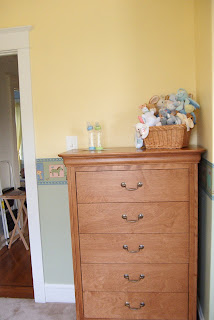 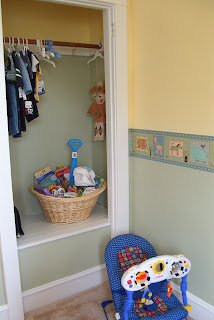 Cue the bugles. The boys knocked our already failing laptop off of the table today. It as hummed it's last hum and beeped it's last beep. So hopefully we will come up with some sort of replacement before too long. In the meantime, if you want an update we can always do it the old fashioned way...by cell phone.
Posted by yamsey at 9:19 PM 1 comment:

I am in the midst of 2nd trimester nesting. Man, I've got it bad! I am just itching to get the office turned into the nursery and getting the boys' room decorated to boot. I finally got John to help me move the furniture out of the office so all I have to do is fix a few spots on the walls, sand and paint! YAY!!
Since I am working up the desire to spackle and sand- I can not tell you how much I HATE doing that- today I started stripping the stain off of the bunk beds we picked up from John's parents' house last week. I did the first bed today and it is in pretty good condition now that I have the stain off. John will have to restain it and then we can put James in a real bed. Woo-hoo!
So if you wonder why I am not ever on face book or blogger lately, there you go. If anyone is feeling energetic, feel free to stop by. I'll put you to work!
Oh and the boys finally got their hair cut this week. They look so sweet! 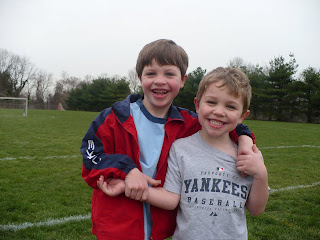 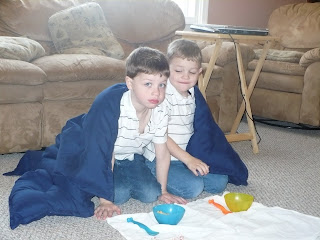 John plays softball every spring and has done so for the last 10 years. You would think that of all the sports for a bunch of slightly older guys to play, this would be the most safe. You would be wrong. Every season someone from our team has ended up in the emergency room. This season has barely begun, only two Saturday tournaments, and already we have had two guys in the hospital.
Yesterday at the tournament Kelly and Paul, our short stop and left fielder respectively, were going for a ball and had a midair collision after running at full speed. Paul stood up almost immediately but Kelly was knocked out for about 3 minutes! This is when the team is glad to have a doctor around. John went out to check on Kelly and after a minute of no movement he yelled for someone to call 911. Paul was unsteady on his feet and mostly coherent but he had blood pouring down his face. Kelly still had not moved.
By the time the ambulances arrived, Kelly was up on his feet, his idea not John's, but had no idea where he was or what he was doing. I am pretty sure he didn't recognize anyone either. The EMTs examined him, strapped him to a board, got the full story from Paul and decided the trauma was severe enough that he needed to go to UPenn rather than the smaller local hospital. Kelly's family was not at the game so I fished his cell phone out of his bag and started calling his wife and mom - really anyone I could get a hold of.
The two ambulances drove off leaving the stunned team members behind. One took Paul to Delaware County where he was diagnosed with a mild concussion, leg contusion and a monsterous headache. Thank goodness his nose was not broken like we all feared! Kelly was shipped to UPenn, I rode along until his wife could show up, and thank goodness his CT scan came back negative for any serious damage. He had a bad concussion, stiches on his ear and over his lip and I am sure he will be sore enough that he will not want to move for the next few days.
All in all, things ended up much better than they could have (think Natasha Richardson hitting her head while skiing), but still softball should come with a warning: COULD BE HAZARDOUS TO YOUR HEALTH!
Posted by yamsey at 11:29 AM 1 comment: