A couple of funny comments from after church yesterday.

James:  Mom this is the snack basket for my class.  Whoever brings the snack gets to be the leader that day.  They say the opening prayer and the... not-the-opening prayer.

Samuel:  Mom, what is the shortest story in the Book of Mormon and all the other stories?  You know, the Pearl of Great Price, the Old Testimony, the New Testimony...

I love my boys!

Today as Samuel was teaching James the songs from his first grade play, he decided to help James write a song about his best friend, Gracie.  Honestly, I am not sure what the melody was but here are their original lyrics (as written by Sam):

I recorded a movie of them singing because it was so stinkin' cute!
Posted by yamsey at 5:41 PM No comments:

Last night I gathered at the movie theater with the book club ladies and saw the next installment of the Twilight movies:  New Moon.  It was... better than I expected.  I tried not to listen to any reviews prior to our showing.  I did, however, grudgingly hear one review late Friday afternoon when NPR gave its report.  They evicerated the entire film, cast and series.  Of course, what do you expect when a teenage vampire love story is being reviewed by a grumpy old man!
What I carried away from New Moon is this:  I now like Robert Pattinson and Kristen Stewart both a little better in their roles as Edward and Bella; I am not completely sold though.  Taylor Lautner seems to have added to his acting ability along with his 30 lbs of muscle and teenage angst.  I really loved him as Jacob.  In fact, I am offically setting up camp on the Team Jacob side of the line.  There were more than a few oohs and ahhs from girls and moms alike as he strode around with his shirt off- even some that were not instigated by Sonrisa.  =)
I think this director did a much better job than the first.  There were significantly fewer ridiculous close ups and awkward shots and the cg work with the wolves was pretty cool -regardless of the fact that when the black wolf first showed up on screen I started having Neverending Story flashbacks.  I loved watching the Bella/Jacob relationship develop, enjoyed that Bella narrated her emotional state through emails to Alice and am thrilled that they preserved my favorite part of the book in the film-the three pages which simply say October, November, December.
As for the end, well, as I was waiting outside of the theater for some friends before the show I overheard a rather loud group of teenage girls say, "And you know at the end that Edward proposes."  (Yes, I restrained myself and did not drop kick them for spoiling the end of the movie for me!)  I was glad to see that the director decided to remain faithful to one of the critical points of the book, despite webchatter to the contrary.
My grade for the movie:  a solid B+ (It would have been an A- if Jacob had kept his shirt off the whole time.)
Posted by yamsey at 5:45 PM 5 comments:

Matthew officially hit the three month mark on Saturday.  As he was sick and the big boys had their final soccer games I didn't get any pictures taken.  Smack me now.  But poor Matthew looked so pathetic with goo leaking out of his eyes and the constant runny nose and he was so miserable it really wasn't the time for a photo shoot.  So I took some pictures of him last night.  He was still feeling a little sick and was exhausted but still as sweet as can be.  The picture with the pumpkin hat was from a few days earlier.  Gotta love that smile! 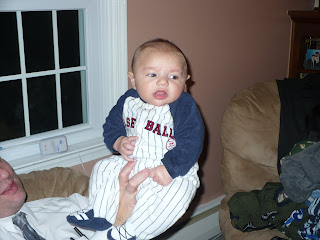 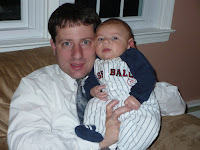 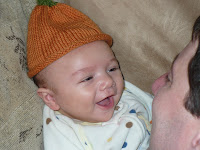 I took him to the doctor on Saturday to make sure his cough wasn't settling into his lungs.  I put him on the scale while I was there:  15 lbs 2 oz.  What do I do when he hits 20 lbs at 6 months and is too big for his infant car seat???

And here are some cute pics of Sam and James and their soccer teams.  They both had a great season! 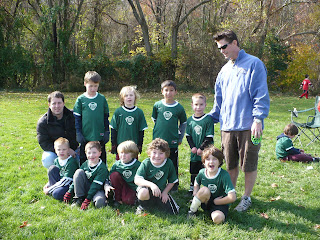 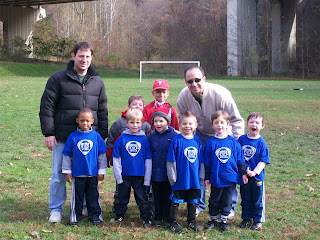 Most people probably don't know that James (4 years old now!) even talks because he gets so stinkin' shy in public.  But this kid doesn't stop talking when he is with me.

Last week in the car:
James:  Mom, when did the dinosaurs die?
Me:  A long, long time ago.
James:  Were there people then?
Me:  Nope.
James:  But Mama, that is just terrible!  If there were no people, who took care of the dinosaurs?

Tuesday at lunch:
Me: Sam and James, thank you for letting me take a nap.  I wasn't feeling very good this morning.
James:  You're welcome.  It was no problem.  We just played.

This morning:
Me:  James, I am going to take a shower.  Do you want to watch tv upstairs in my room or downstairs?
James:  I think I will be alright downstairs, thank you.

James really makes me laugh!
Posted by yamsey at 9:57 AM 1 comment:

Happy Halloween!  This year Samuel was Captain Rex from Star Wars The Clone Wars.  This is his 4th Star Wars Halloween costume.  I think we have a Star Wars Fan on our hands! 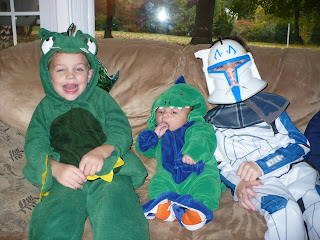 James insisted that he wanted to be Spider Man this year- until we went to Old Navy one day and he saw this dragon costume.  I thought he was going to change his mind again so I didn't get it for him.  However, two weeks later after all he did was talk about being a dragon I went back to Old Navy and they didn't have his size.  I called every Old Navy store in the Philadelphia region.  No luck.  I ended up calling my sister, Lisa, in Virginia to see if she could find one. I also had Keri, in Utah, ready to go out and find one if Lisa couldn't.  Luckily, Lisa found one and shipped it to me.  Thank heavens for sisters!

Matthew is sporting the dinosaur costume we bought for Sam when he was a baby.

Below are before and after trick-or-treating.  We wore them out! 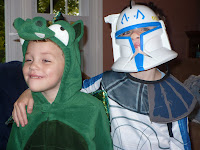 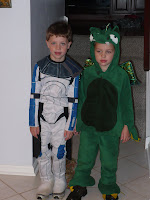 Samuel had a Halloween parade at school.  The high school marching band (all 400 of them) set up and played in the middle of the parking lot while the kids walked around them.  It was really cool! 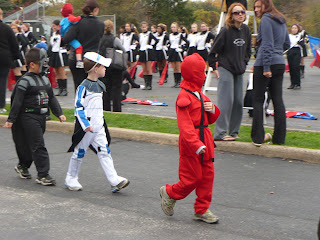